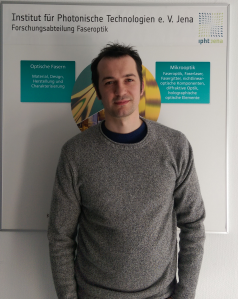 Alessandro Tuniz was born in Italy in 1984. He received the B.Sc. degree in Physics from The University of Trieste in 2007, and the B.Sc. (Honours) at the University of Sydney in 2008, working in CUDOS. In 2009 he helped launch as a doctoral student the metamaterial fibers group with Prof. Boris Kuhlmey and Prof. Simon Fleming, completeing his Ph.D in 2013 with the thesis “Metamaterial fibres for invisibility, hyperlensing and artificial magnetism: fabrication, characterisation and theory”, for which he was awarded the School of Physics Postgraduate Alumni Prize for Best Physics PhD Thesis at the University of Sydney.

In 2014 he received a Humboldt Postdoctoral Fellowship, which is designed to attract highly qualified scientists and scholars to Germany. In 2015 he joined Prof. Markus Schmidt’s group at the Leibniz Institute of Photonic Technology in Jena to lead the fibre-plasmonics sub-group, with the aim of integrating novel active and passive functionalities into optical fibers on the basis of metallic nanowires.  From 2017-2020 he was a Sydney Nano Institute University of Sydney Fellow, on the topic of hybrid nonlinear plasmonics. He is currently a Senior Lecturer and ARC Discovery Early Career (DECRA) Fellow at the University of Sydney, where he is the director of the Sydney Terahertz Lab. His research interests include plasmonics, nonlinear nanophotonics, terahertz optics, metamaterials, sub-wavelength imaging, and hybrid (multi-material) photonic devices, encompassing both experimental and numerical simulation techniques